Rich pictures can be produced in different ways depending on time and budget, while the goal remains the same – to visually capture complex or multiple ideas in a picture which is rich in metaphors and stories and to engage different groups in the process.
The usefulness of Rich pictures is based on the language we use. While we communicate ideas with words the actual words we use are often a series of pictures and metaphors. In particular, when we need to explain an abstract idea, for example how we might help ‘change’ an organisation, we naturally reach for a visual metaphor that will capture what we mean – “this change will be a journey”, “we need to step up”, “we need to cross over to the other side of the divide” and so on. The use of metaphors is not an add-on to how we communicate, it is an intrinsic part of how we understand the world and communicate with each other. We use metaphors so instinctively that we are hardly aware that we are doing so.
Rich Pictures are visual representations of concepts and strategies that can be shared by everyone. Rich pictures emerge from conversations and the process of producing a picture, of groups coming together to find common metaphors and visuals, is as important as the final image and crucial to developing a successful Rich picture. Rich pictures are a vital communication tool in understanding and then presenting a vision or a strategy in a way that corresponds to how people in the organisation think and behave. They help formulate strategy, capture the vision and translate it into meaningful action for change.
Rich pictures – Partnership for Child Development

The Rich picture for the Partnership for Child Development was developed to communicate the work they do in supporting African communities.
We used a platform metaphor to show the connections between different parts of the community and how they are underpinned by local and national initiatives. The picture shows the activities and stories that contribute to a healthy community centred around education.
The picture below took a few days to produce and started with discussions and concept sketches at the PCD offices in Imperial College. The sketches were then shared with a wider group and a final picture was agreed and drawn digitally. The header image on this page shows the development of a Rich picture from quick pen and paper concept sketch to final digital artwork. 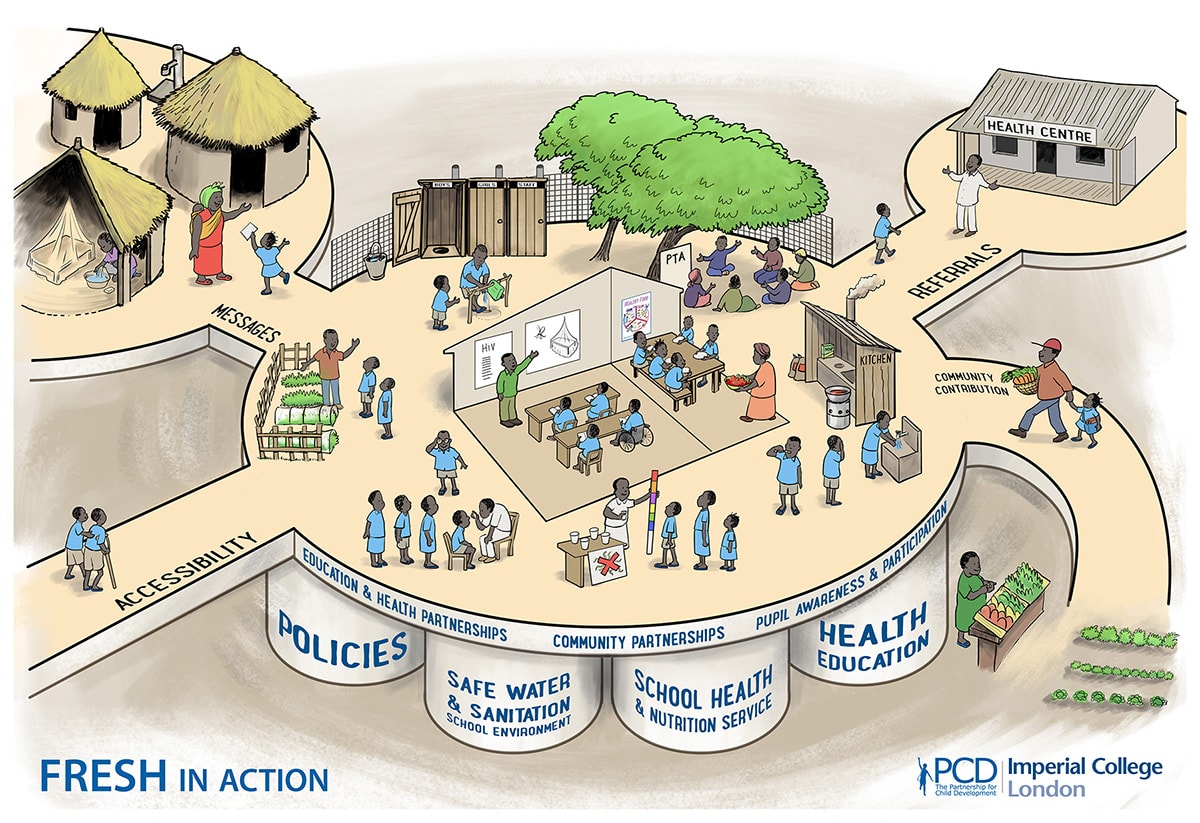 Firefly Learning develop learning platforms in education, for teachers, pupils and parents. The Rich picture needed to convey the different stages from a demo of the product to the launch and roll out.
The initial concept went through many stages before being finalised. It allows Firefly to show how long it might take and the key stages to making the roll out of the software as successful as possible. The final artwork was drawn as a vector illustration. Although vector illustration can take longer they are resolution independent and highly editable. 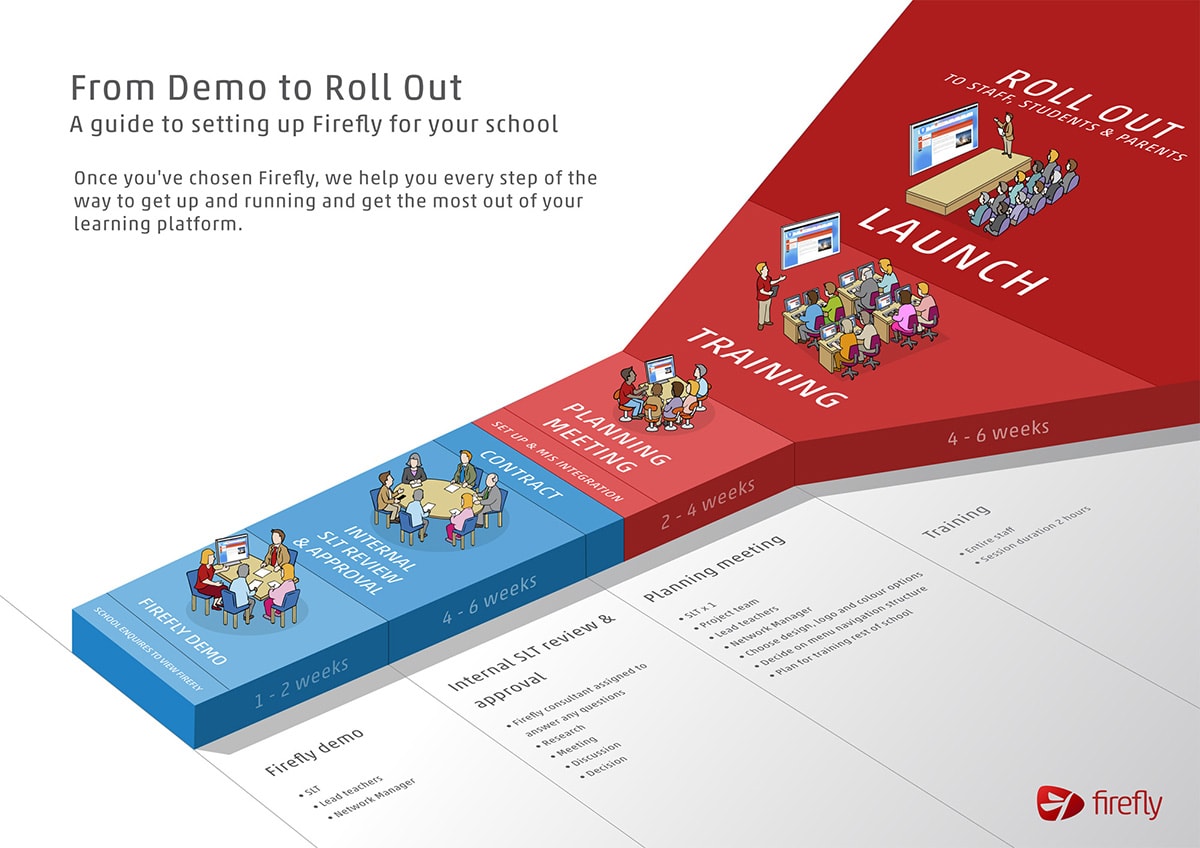 A Rich picture was commissioned by Children for Health, a charity promoting the use of mobile phones to communicate health messages in developing countries. The Rich picture, from concept sketches to final artwork, was developed and finalised in three days. The picture shows some of the messages and the different ways children can communicate them, through their schools, school clubs, through songs and posters and of course through mobile phones. The final poster contains all the 100 messages on the reverse. 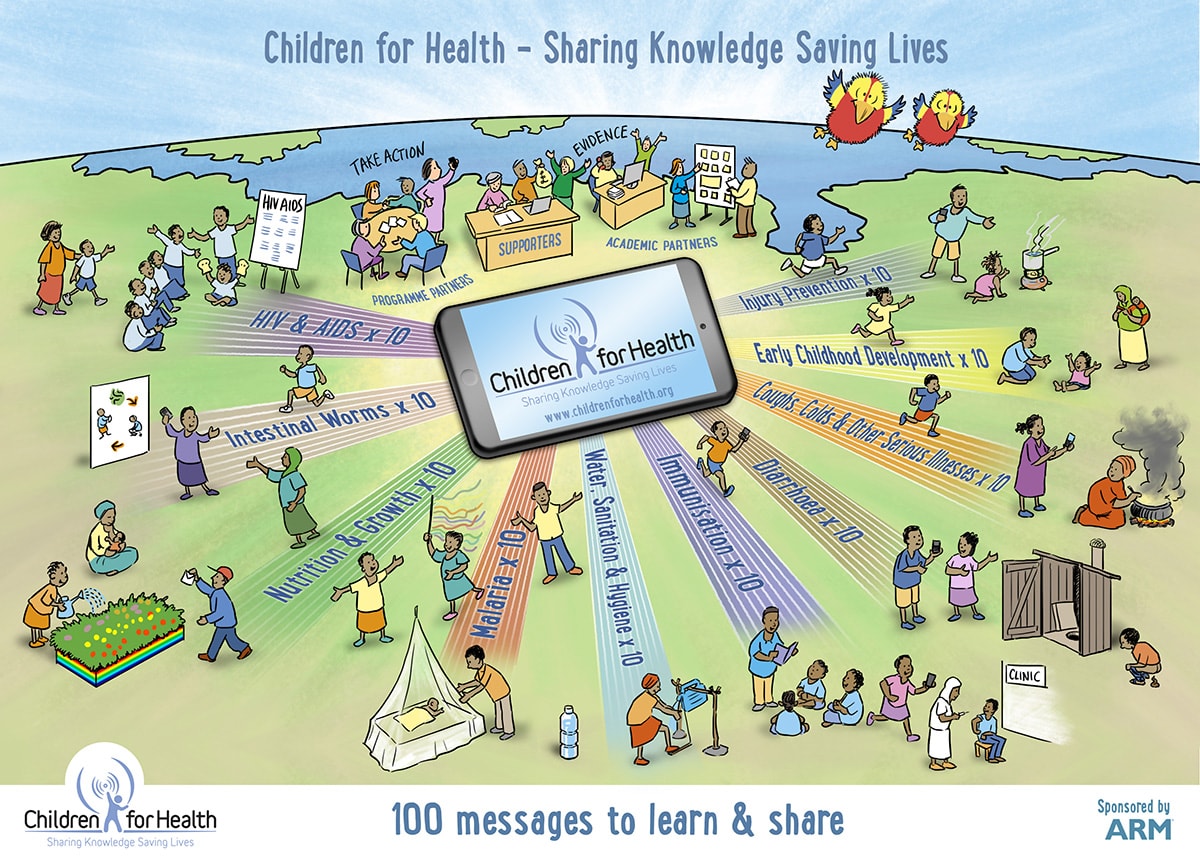 If you are interested in discussing a Rich picture project or wish to see more work please call David on +44 (0)20 8546 3462. You can also contact him via LinkedIn, or email David ‘at’ Inscriptdesign.com